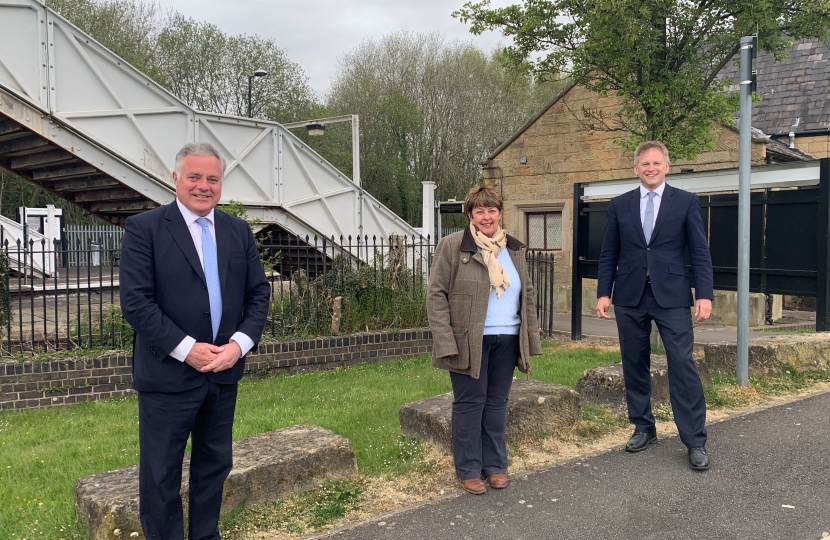 On Tuesday 27th April, Member of Parliament for Clwyd South, Simon Baynes MP, welcomed the Secretary of State for Transport, Rt Hon Grant Shapps MP, on a visit to Ruabon Station in Clwyd South where they discussed the ongoing campaign to secure funding for step-free access at the station.

The visit follows Mr Shapps’ announcement that Ruabon Station has progressed on to the next stage of the Access for All programme which will allow the Department for Transport to establish any risks and the anticipated final costs associated with delivering the project.

Since becoming the MP for Clwyd South, Simon Baynes has been active in making the case for step-free access to the UK Government (which is responsible for the infrastructure of the railways in Wales) during Questions in the Chamber of the House of Commons and in meetings with Ministers in the Department for Transport, the Treasury and the Office of the Secretary of State for Wales. He has also worked closely with the stakeholders involved in Ruabon Station including Wrexham Council, Network Rail, the Welsh government, Ruabon Community Council, Friends of Ruabon and the Chester Shrewsbury Rail Partnership.

Ruabon is a busy station with two flights of stairs that passengers need to use in order to access the Chester platform and it is the only station on the Chester to Shrewsbury route that fails to meet passengers’ step-free access needs.  From 2002 to 2017, footfall increased by 220% among those entering and exiting the station and the addition of a new development 360 houses and a hotel in Ruabon is also expected to bring additional footfall and demand for the station. Ruabon Station is also the rail and bus gateway access for Llangollen and the World Heritage site at Pontcysyllte.

“It was a great pleasure to welcome the Secretary of State for Transport to Ruabon where I was pleased to show him around the station and make the positive case for step-free access which will allow all passengers to access the jobs and leisure opportunities that will make our community an even greater place to live and work.

“Many representatives, organisations and residents in Ruabon have been campaigning for step-free access at Ruabon Station for several years and I was very pleased to be able to highlight the importance of our campaign to the Secretary of State in person.”