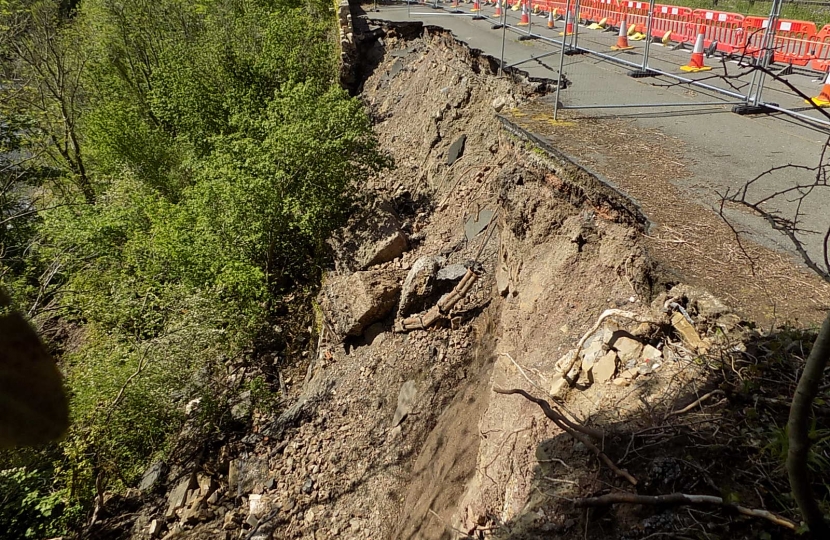 Following devastation in the local area as a result of Storm Christoph earlier in the year, Member of Parliament for Clwyd South, Simon Baynes MP, has criticised the Welsh Government and called on Labour Ministers to step up and provide the support and funding necessary to repair damaged infrastructure.

In February this year, vital infrastructure was damaged due to flooding, including on the B5605 between Newbridge and Cefn as a result of a landslide. This has severed the link between the two communities and the wider settlement areas of Chirk, Plas Madoc and Ruabon. Representatives of the Welsh Government have since confirmed that the landslide on the B5605 between Newbridge and Cefn will be ineligible for funding support, despite assurances made previously.

“In the event of closures on the trunk road, whether for planned works or emergencies, alternative routes are diverted via Llangollen – a fifteen mile diversion – and this is clearly not sustainable. Particularly when emergency vehicles are taken into account, this is unacceptable. I’m calling on Welsh Government Ministers to step up and take action on an issue that is seriously affecting residents in our part of Wales. I’m concerned that Ministers in Cardiff Bay are turning a blind eye to the damage to our communities in Clwyd South caused by flooding. I’m willing to work with Welsh Government to ensure Wrexham Council receives the funding support they need to repair our damaged infrastructure.”