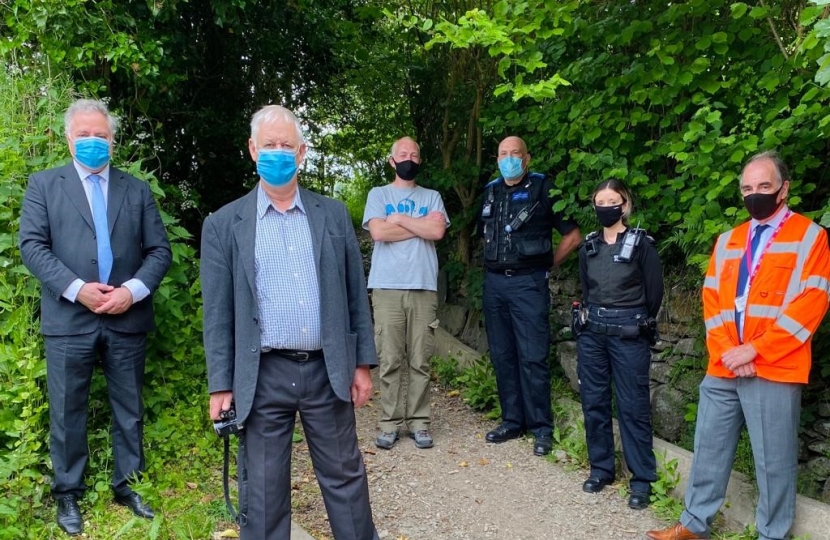 The area has attracted off-road bike users in particular, due to the road conditions. PCSO Gareth Jones, recently spoke to a group who had come from areas such as Nottingham and the Midlands. Similar scenes have also played out in other parts of Wales, not only for motorbikes but also groups of 4x4s, and in the Lake District and North Yorkshire.

“Enough is enough. My inbox is crammed with similar complaints from local residents who are being driven away from ancient lanes and old drovers tracks because of touring motorised vehicles with thrill-seeking drivers whose actions are basically bullying walkers, cyclists and horse riders away from their local countryside. There are some careful and considerate people driving these lanes but we are also seeing more and more illegal activity on the lanes which seems to attract vehicles from all over the UK and abroad. I'm hearing of more and more confrontations between landowners and 4x4 drivers and motorcyclists. And I recently heard of drivers being threatened with a shotgun which makes one wonder what pushed a person to such extremes.

“I don't want to stop people from enjoying the countryside in a responsible way, but to see my constituents suffer the intrusions of noise, pollution and crime combined with danger and threats is simply not acceptable. I am now calling on both Welsh Government and Westminster to undertake a review of the effects that "off-roading" is having on areas like the Ceiriog Valley and Snowdonia in Wales, and the likes of Cumbria, the Peak District and North Yorkshire National Parks in England.”

“The Ceiriog Valley has for so long had issues with anti-social driving with trail bikes and 4x4 use in the area along the tracks, which has caused much disturbance for local residents and tourists. And, since the easing of lockdown restrictions, the number of incidents reported in the area has been increasing. As a result, some people no longer feel safe walking, horse riding or cycling in the area. The lack of maintenance of the lanes over the years, with sheer rock and in places deep mud, has created the perfect conditions for off-road motorbikes as they use it as a scrambling track.

“We patrol the area and engage with the community as much as we can, but of course, it is impossible to be there 24 hours a day, especially given the isolated nature of where these incidents occur. As a result, my colleague PCSO Martin Griffiths and I arranged a meeting with the help of local Councillor Trevor Bates, who has done a fantastic job working with Wrexham Council to hopefully get new gates installed along the tracks. The plans for new gates are a welcome feature that will hopefully deter motorcycles and off-road vehicles using the lanes in future. We urge anyone who witnesses anti-social driving in the area to contact officers of 101, or via the web chat.”

“I was very sorry to hear of the incidents experienced by residents and their families in the Ceiriog Valley, some of which could have had devastating consequences. This is completely unacceptable. It’s extremely important that road users and visitors to the area drive safely, and comply with the law, to prevent dangerous situations. I would like to thank all of those who attended the meeting with me recently, especially North Wales Police, and I was grateful to be able to speak to residents and hear from them first-hand about this problem blighting our otherwise idyllic countryside in the Ceiriog Valley.”