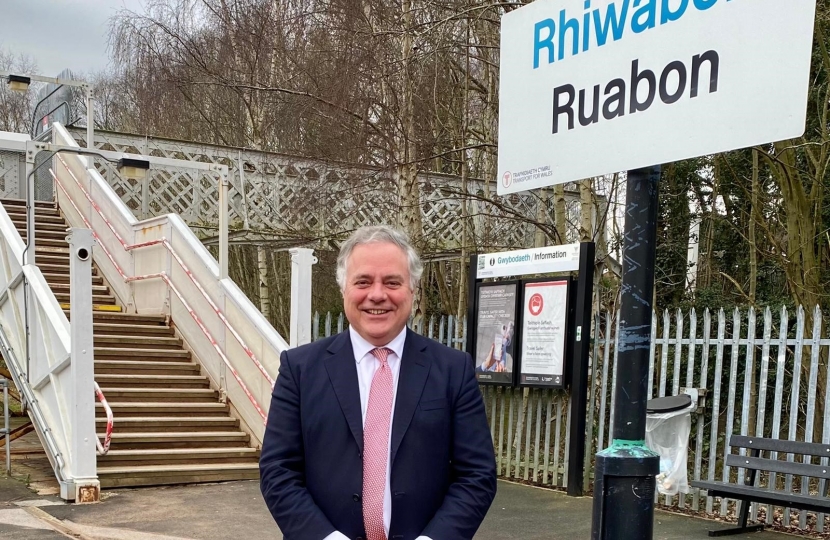 Member of Parliament for Clwyd South, Simon Baynes MP, has welcomed major progress by the UK Government on step-free disability access at Ruabon Railway Station. Secretary of State for Transport, Grant Shapps MP, has said today that Ruabon Station will be progressing to the next stage of the Access for All programme. This next stage of design will allow the Department for Transport to establish any risks and the anticipated final costs associated with the project.

Since becoming the MP for Clwyd South, Simon Baynes has been very active in making the case for step-free access to the UK Government (which is responsible for the infrastructure of the railways in Wales) during Questions in the Chamber of the House of Commons and in meetings with Ministers in the Department for Transport, the Treasury and the Office of the Secretary of State for Wales. He has also worked closely with the stakeholders involved in Ruabon Station including Wrexham Council, Network Rail, the Welsh government, Ruabon Community Council, Friends of Ruabon and the Chester Shrewsbury Rail Partnership.

Ruabon is a busy station with two flights of stairs that passengers need to use in order to access the Chester platform and it is the only station on the Chester to Shrewsbury route that fails to meet passengers’ step-free access needs.  From 2002 to 2017, footfall increased by 220% among those entering and exiting the station and the addition of a new development 360 houses and a hotel in Ruabon is also expected to bring additional footfall and demand for the station. Ruabon Station is also the rail and bus gateway access for Llangollen and the World Heritage site at Pontcysyllte.

“Simon Baynes has been championing the cause of constituents who need step-free access at Ruabon station, and I'm delighted we can now progress work to the next stage. This shows the value of having strong Conservative voices in North Wales.

“Our railway should be easily available to all, not just the able-bodied, and we must press ahead with projects to make stations accessible.”

“It is very good news for residents in Ruabon and the wider community in Clwyd South and Wrexham that the UK Government has said today that Ruabon Station will be progressing to the next stage of the Access for All programme. This is something I’ve been campaigning for both locally in Clwyd South and in Parliament since day one of becoming an MP, and before that as a candidate, and it shows the commitment of the UK government to Clwyd South and North Wales.

“Many representatives, organisations and residents in Ruabon have been campaigning for step-free access at Ruabon Station for several years and I am very pleased to see this important progress to the next stage of design. This would not have been possible without the help and support of County Cllr David Bithell (Environment and Transport Lead at Wrexham Council), Darren Williams (Chief Environment and Technical Officer at Wrexham Council), County Cllr Joan Lowe (the local County Councillor for Penycae and Ruabon South), Sheila Dee (Community Rail Officer of the Chester Shrewsbury Rail Partnership), the team at Network Rail, the Welsh government, Ruabon Community Council and the Friends of Ruabon who have all worked so hard to get to this crucial stage.

“This project is needed to make sure all passengers can access the jobs and leisure opportunities that will make our community an even greater place to live and work.”