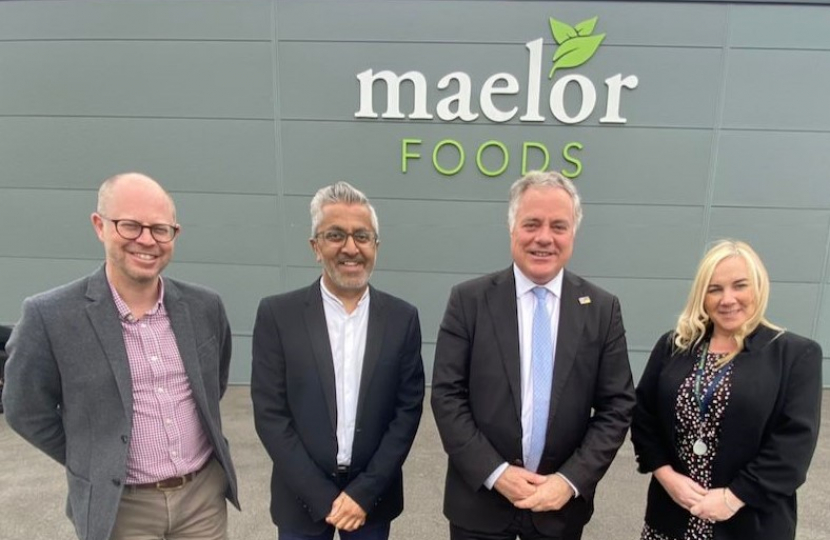 On Friday 20th May, Member of Parliament for Clwyd South, Simon Baynes MP, visited Maelor Foods to learn more about the Clwyd South business including the investment the company brings to the local area.

Maelor Foods has operated a poultry processing facility since 2015, creating 251 jobs and has invested over £20 million into the facility. The Maelor Foods facility is one of the most advanced of its kind in Europe, processing home reared chickens of the highest standard, supplying retailers and food service companies. It sources the chickens from a wide range of farms including 12 in Wales of which 3 are in the Clwyd South/Wrexham area.

During the visit, Mr Baynes was able to learn more about the company and their plans for the future including investing further in Clwyd South such as creating new jobs and improving sustainability. Mr Baynes was also able to understand the ways in which Maelor Foods engages with the local community through sponsoring Marchwiel Villa FC, providing a minibus service for a local care home and also raising money for Nightingale House Hospice.

“I’m grateful to Simon for taking the time to visit us and find out more about our state-of-the-art facility. I’m pleased Simon recognised the contribution Maelor Foods makes to the Clwyd South economy and the work we do to support the local community. We look forward to working with him more closely as we look to invest in our future.”