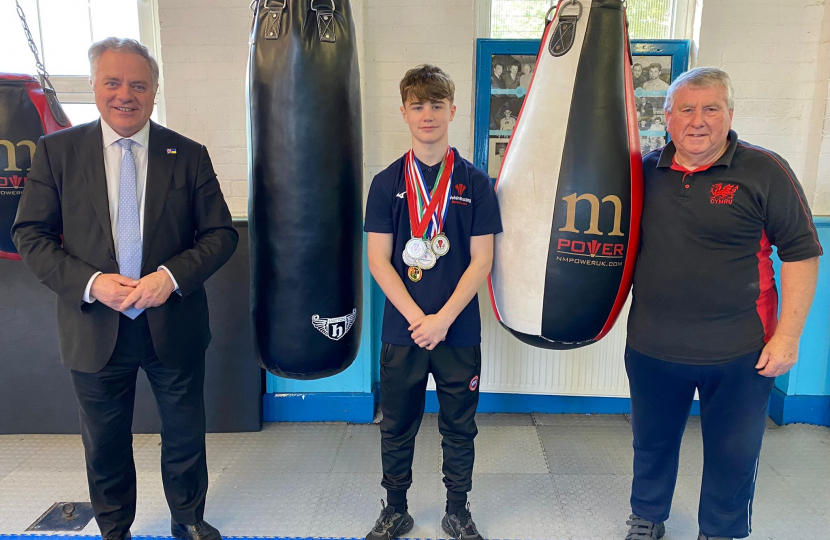 On Friday 20th May, Member of Parliament for Clwyd South, Simon Baynes MP, visited Maelor Boxing Club to meet Cory Jones, a young boxer with a number of recent achievements under his belt, along with his coach, David ‘Butch’ Jones, at their gym in Cefn Mawr.

During the visit, Mr Baynes congratulated Cory for winning both the Schoolboy and Junior Welsh Championship vests. He has also been selected to attend the GB training camp in Sheffield as a result of his skill and commitment to the sport. He also met Cory’s parents, Luke and Vicky Jones, and his brother, Jett, who provide a huge amount of support to Cory in his remarkable boxing career.

Cory has recently travelled to Ireland to compete and is just back from Bulgaria where he came in the top 16 in the Youth European Championships. On 10th June, he will be competing for Wales in the Youth British Championships in Barnsley.

Mr Baynes had previously written to Cory congratulating him on his achievements, and was invited by Butch to meet the teenager during his training session.

Cory expressed his gratitude to Butch Jones and the other coaches at the boxing club – Aaron Fitzpatrick, Malcolm Hughes, Adam Hughes and Daniel Edwards. Cory, who has been boxing since the age of 8, also coaches 8-11 year-olds at the club.

“Cory, his family and I were all really pleased to meet with Simon, and I was greatly impressed with the interest he showed in Cory’s career and the history of the Maelor Boxing Club. I was particularly grateful for his offer to help the club in any way. We are all very thankful to him.”

“It was a pleasure to speak to Cory and Butch at the Maelor Boxing Club in Cefn Mawr and to meet Cory’s very supportive family. It’s great to see young people locally thriving within their different interests, and Cory has shown tremendous determination and drive, achieving national junior boxing titles and making his family and trainers very proud.

“I admire the work both he and Butch are putting into preparing for championships and I am sure Cory will go on to win at future competitions as well. I want to reiterate my congratulations to Cory, who has an exceptionally bright future ahead of him, and to Butch and the entire team at the Maelor Boxing Club. I wish them all the very best for the future.”