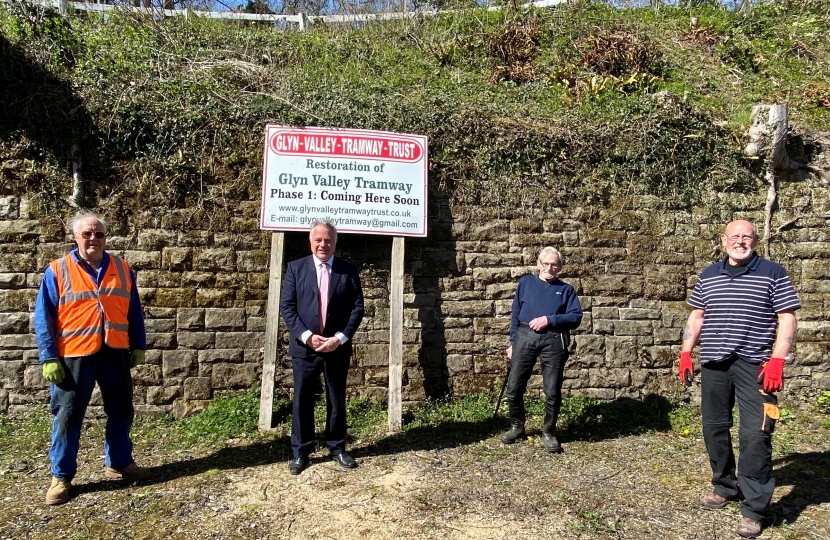 The Trust have re-started weekly working parties after they were put on hold for several months during the latest lockdown, concentrating on the Tramway Station at Chirk which, in the days when the Tramway was operational, was an interchange facility on the Great Western Railway's Shrewsbury to Chester main line.

The original Tramway Station building in Chirk, next to the mainline station, was demolished in the 1960s. While most of the bricks were deposited on the adjoining track bed where they lay more or less undisturbed for many years, accumulating layers of vegetation, soil and many trees which obliterated any hint of the existence of the once bustling tramway.

The working parties have now exposed much of the former platform, as well as the foundations of the station building. There is still quite a lot of clearance to complete but, subject to funding, they hope to commence reconstruction of both the platform and the station building within the next 6 - 9 months, and at the same time lay some temporary track for ad hoc operation of trains, until we are ready to lay permanent track of the correct gauge.

“We were delighted to welcome Simon Baynes for a visit to Chirk Railway Station to see, first-hand, progress with our project to reconstruct part of the late lamented Glyn Valley Tramway. As we clear the old tramway platform and the track bed alongside it, so the site begins to show more and more evidence of its former function as a busy railway terminus, and once the station platform and building are restored, we look forward to making a start on laying track to the south and west towards Pontfaen.

“There is a long way to go, but Simon's visit gave us a huge boost. The knowledge that our local MP has got such a close interest in, and understanding of, the heritage railways sector is the best encouragement we could have. We welcome support from the local community and all railway enthusiasts alike. Membership subscriptions and volunteer work at the station are both vital to take us forward: http://www.glynvalleytramwaytrust.co.uk/.”

“It was a pleasure to meet such a hard-working group of volunteers as they look to recreate the Glyn Valley Tramway and bring a piece of our heritage back to life. I very much enjoyed learning more about the history of the tramway and about the work of the volunteers as they clear the site of the old tramway station. I have a strong personal interest in heritage railways and want to wish them the very best of luck and  look forward to following the progress on this exciting project in the future.”