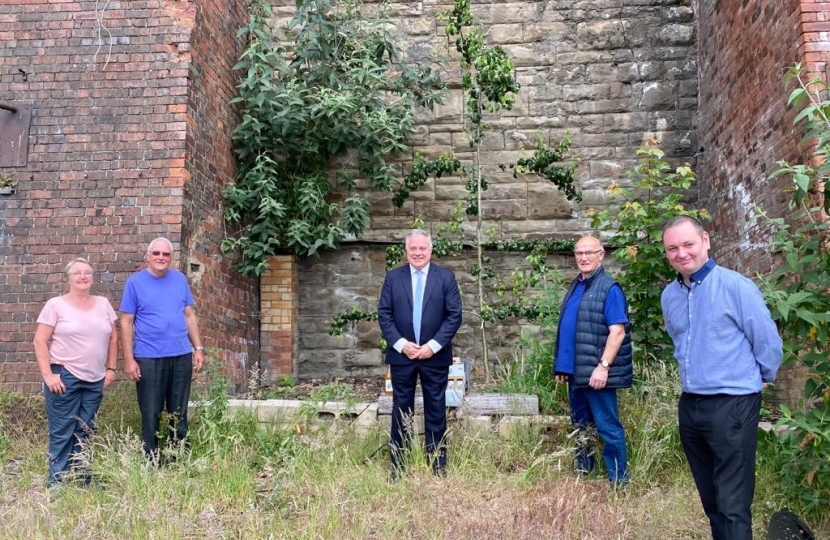 On Friday 18th June, Welsh Conservative Member of Parliament for Clwyd South, Simon Baynes MP, made a socially distanced visit to the Brymbo Heritage Orchard – a local volunteer project which is working with the Welsh Perry & Cider Society and the Heritage Lottery Fund to help preserve Welsh heritage apple and pear trees and produce traditional cider and perry on the old Brymbo steel site.

During the visit, Mr Baynes met Ken Mathews (Project Leader), Brymbo County Cllr Paul Rogers and volunteers, James Boardman, Ian and Chris McLean. He was given a tour which included the orchard trees, beehives and the production process for the cider and cider vinegar. He also learned about the procurement of trees, training in the planting, pruning, grafting and general maintenance of the orchard and biodiversity studies of the orchard on which the project is working with local schools and groups.

“The Orchard was started with the help of Welsh Perry & Cider Society and The National  Lottery, supported later by Social Farms & Gardens and Wales Heritage Orchards, who we helped plant 70 fruit trees in 4 local sites. I would also like to thank local businesses: AMPM Convenience Store (Brynteg), Airbus UK, Tesco and Co-op. Whilst waiting for our own fruit off the trees we have planted at the heritage site and Brynteg CP we have used fruit from orchards in the local area to make Apple Juice, Cider & Apple Cider Vinegar.”

“The Brymbo Heritage Orchard project has been a huge success and therefore I was pleased to join Simon Baynes MP on this visit around the site. It is great to see these fruit trees planted around the former Steelworks and also that some of the historic buildings on the site are now being used for the production of cider. I would like to thank the volunteers for all their hard work and Simon for taking such a keen interest in the community.”

“I was delighted to visit the Brymbo Heritage Orchard which I first learned about some years ago when I was Chairman of the Welsh Historic Gardens Trust. It was also particularly heartening to hear about how much emphasis goes into preserving the local environment and building a sustainable and diverse ecosystem in the orchard – whilst at the same time, providing a social good for the wider community, particularly with school visits to the orchard.

“It supports so much good work locally in Brymbo, and the volunteers have some very exciting plans for the future. It’s an example to people and groups across the country when it comes to creating a sustainable local project to transform disused land.”