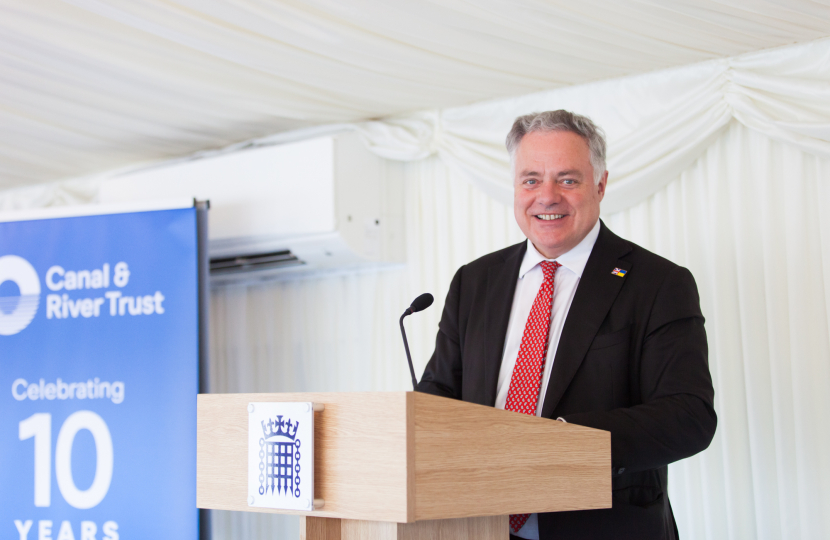 On Tuesday 28th June, Member of Parliament for Clwyd South, Simon Baynes MP, sponsored a Parliamentary Reception on behalf of the Canal and River Trust, to celebrate 10 years of cleaner, greener and more open waterways in the United Kingdom.

Mr Baynes, and around 50 other Parliamentarians (MPs and Peers), joined colleagues and representatives from the Trust to celebrate the charity’s 10th anniversary and to learn more about its work in Clwyd South and the rest of North Wales.

The Canal and River Trust protects and preserves more than 2,000 miles of waterways across England and Wales – a network that is used by millions of people. Their network includes the Llangollen Canal, Trevor Basin and Pontcysyllte Aqueduct.

Under the Trust’s stewardship, canals across the UK now have more boats than ever before and are used by more people than at any time in history.  The Trust brings vital green and blue space to the doorstep of millions of people in towns and cities where access to this space is vital for improving community wellbeing and to tackle health inequalities.

At the celebratory event in Parliament, Simon Baynes MP, paid tribute to the Trust team and their volunteers who work tirelessly to maintain, protect, and enhance canals and rivers in Clwyd South and across the rest of the United Kingdom.

“It was a pleasure to join the Canal and River Trust to celebrate the nation’s waterways on their 10th anniversary. It was fantastic to learn more about the amazing work they are doing locally in Clwyd South on the Llangollen Canal, Trevor Basin and Pontcysyllte Aqueduct. No other charity brings so much free, open and accessible blue and green space to the doorstep of so many. I look forward to continuing to support the Canal and River Trust as they continue to broaden the appeal of waterways, engaging communities and making these special places inclusive and available for all.”