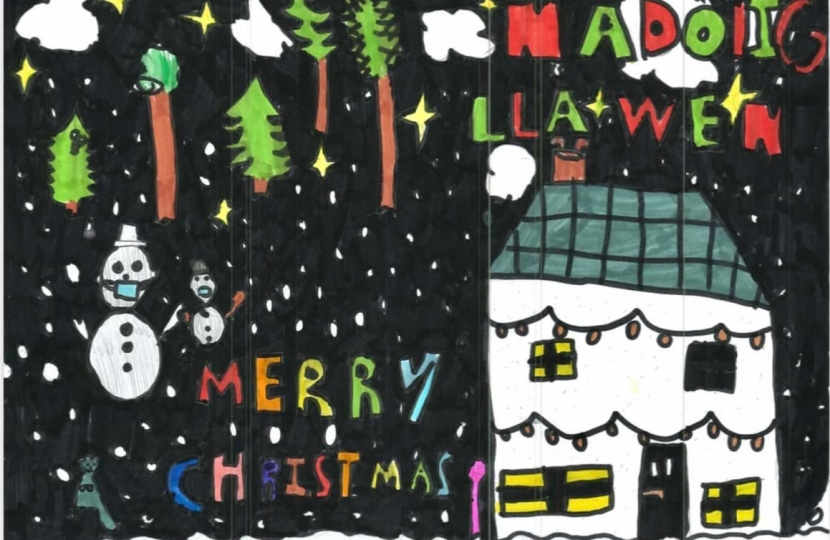 Clwyd South MP, Simon Baynes, has congratulated the 2021 winner and runners up of his MP Christmas Card Competition and thanked everyone who took part.

Mr Baynes launched a Christmas Card Competition on 3rd November 2021 to design his official Christmas card and received a large number of pictures from Primary School pupils in Clwyd South, who were excited to showcase their artistic talents.

Mr Baynes said judging the competition was a difficult process due to the high standard of entries, however has congratulated the winner, Seren Brierley of Ysgol y Gwernant and the two runners up Romany Roberts from Rhosymedre Community Primary School, and Rhys Jones from Ysgol y Gwernant. Seren received a £20 book token and Romany and Rhys received £10 tokens.

The winning design has been sent to the Prime Minister, Boris Johnson, and other public figures in Government and beyond, with the designs from the runners-up featured on the back of the card.

“I was delighted to hold the Christmas Card Competition and would like to take this opportunity to thank everyone who took part and congratulate the winning entries. The standard of entries was extremely high and it was very difficult to decide on a winner. However, I would like to congratulate Seren Brierley on her excellent design and also Romany Roberts and Rhys Jones on being runners up.

“I was extremely proud to present the Prime Minister with the winning Christmas Card design and to showcase the wonderful talent we have here in Clwyd South.”

Simon Baynes MP has encouraged Denbighshire businesses in Clwyd South who have been impacted by the latest Coronavirus restrictions in Wales to apply for the Welsh Government’s Emergency Business Fund – January 2022.