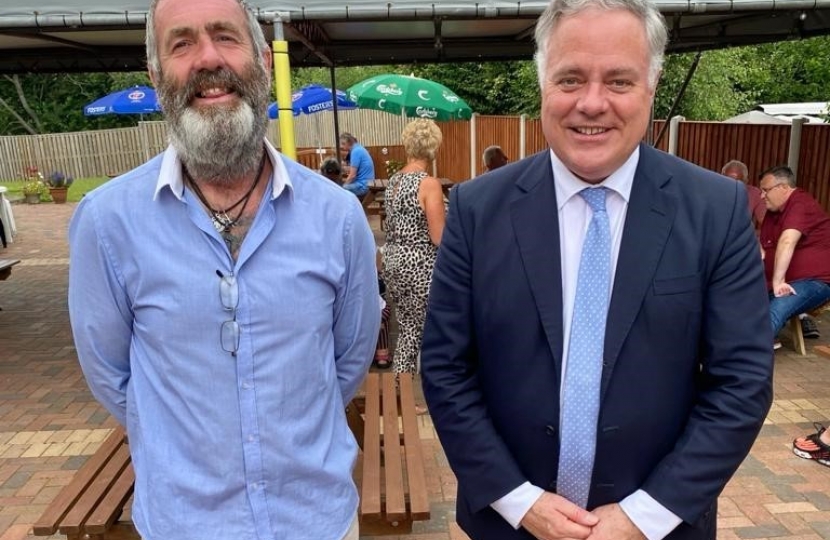 Welsh Conservative Member of Parliament for Clwyd South, Simon Baynes MP, recently met with Paul Edwards at the Cross Foxes in Penycae as he celebrated the completion of his sponsored walk from John O’Groats to Land’s End in aid of Hope House Hospice.

During the course of his walk, Mr Edwards completed on average 25 miles a day dressed as the Marvel character Deadpool (in honour of Ryan Reynolds and Rob McElhenney's takeover of Wrexham AFC).

He had prepared for the solo and unsupported 971-mile hike with a gruelling 24-week training schedule. And his last epic trek in 2019 from Scotland to Wales, took him to the three peaks of Ben Nevis, Scafell Pike and Snowden, before arriving home in Penycae.

Mr Edwards, who has been fundraising for various different charities for over 20 years, set a target of raising £10,000 from his walk for Hope House, but he has spectacularly exceeded this figure, raising an amazing £14,000 so far. Donations can still be made to Paul’s Just Giving page on: www.justgiving/fundraising/paul-edwards1000mileshike.

“I have had some incredible experiences on this challenge, but throughout the journey, the one thing that will forever stay in my memory is the kindness, generosity and support of the British people. From the Northernmost tip of the country to the southernmost, I had such a fantastic response from people I met. Whether it was to ask me into their homes for a cup of coffee, stopping their cars to offer me a bottle of water and something to eat, stopping to chat about what I was doing or just beeping the horns and waving as they drove by, the people of Britain are amazing and this is reflected in the wonderful amount of money raised so far.”

“Having completed many events and challenges for various charities in the past, this was the biggest by far for Paul, who pushed himself to the limit to achieve a fantastic result for Hope House Hospice. I would like to join everyone else who has praised Paul for his selfless charity work – which he also self-funds so that every penny raised goes to the hospice. He is a local hero in Penycae and I know that his family, friends and neighbours will all be tremendously proud of what he has achieved. Many congratulations, Paul!”