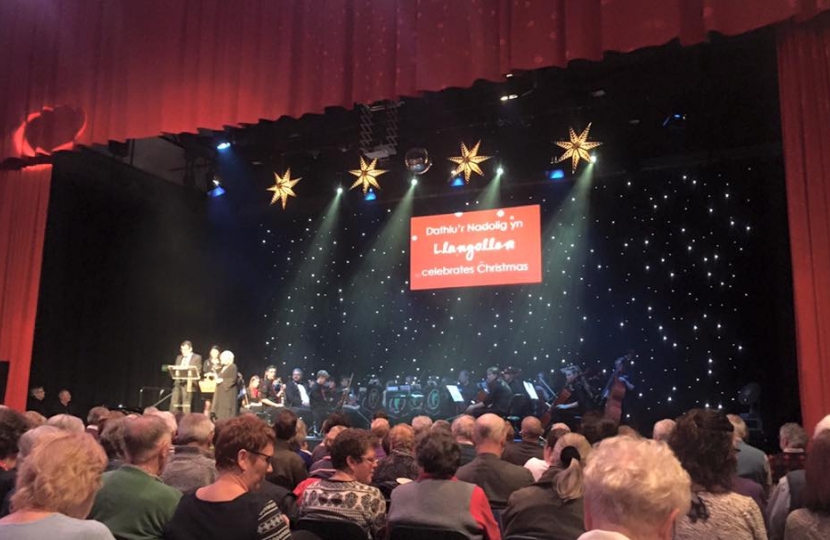 The Christmas Concert on Sunday 13th December organised by the International Musical Eisteddfod in the Royal Pavilion Llangollen was very popular and enjoyable.

The boys in Cor Bechgyn y Rhos sang with great confidence and clarity under the baton of Aled Phillips. The Flintshire County String Orchestra is a credit to the county and to Aled Tudor Marshman, the County Music Services Manager. NIc Parry compered the evening expertly and the male vocal group Trio lifted all our spirits with their rich voices and sense of humour.

“I greatly enjoyed the evening and was particularly impressed by the standard of music-making by the young singers and string players. Having been Chairman of North Powys Youth Music for seven years, I know how much hard work goes into a concert like this and how much pleasure it brings to the young musicians, their families and the audience.

I also enjoyed meeting in the interval several of the officers of the International Musical Eisteddfod and some of the volunteers (who number 800 in total) without whom the Festival in July could not happen. We all gave a particularly warm round of applause in the second half when there was a presentation by the current Chairman Dr Rhys Davies to the former Chairman Gethin Davies OBE who has given tireless service to the International Musical Eisteddfod over 64 years and has the distinction of being the Festival’s only two-time Chairman in its history.

All in all, it was a really enjoyable evening and a great way to get into the Christmas spirit.”