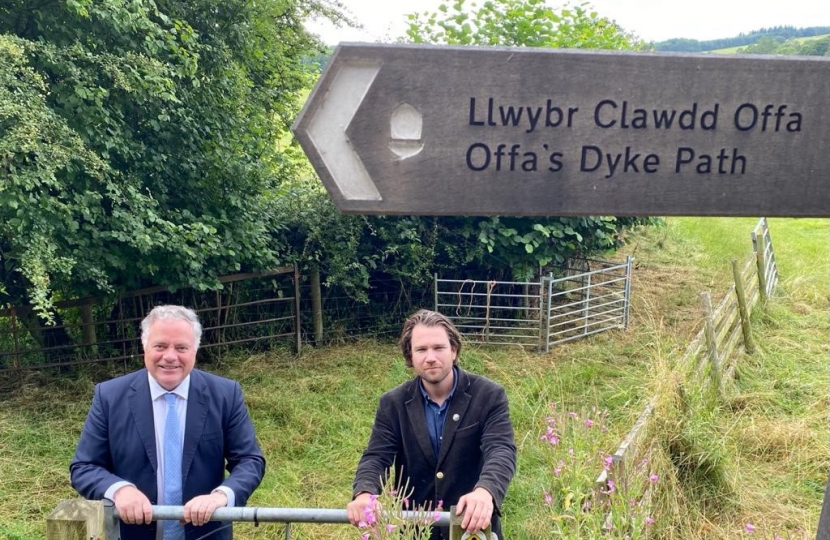 On Friday 30th July 2021, Welsh Conservative Member of Parliament for Clwyd South, Simon Baynes MP, visited a section of Offa’s Dyke near Chirk to learn more about the Offa’s Dyke Rescue Fund that has recently been launched.

Offa’s Dyke runs through the Clwyd South constituency and attracts many visitors every year. The Offa’s Dyke Rescue Fund has been launched as a response to damage to parts of the Dyke and has brought together conservation groups and government bodies in an attempt to help restore and preserve the condition of the Dyke. Over recent years, the Dyke has seen some deliberate and irreversible acts of damage. And as it is private land, it is up to landowners and local communities to maintain and ensure its upkeep.

Alongside CADW, the National Trail unit and English Heritage, the Offa's Dyke Rescue Fund will aim to make purchase parts of the Dyke considered to be 'under threat' from damage or gross negligence. The fund will also be made available to the CADW and Historic England sponsored Offa’s Dyke Conservation Project Officer to pay for proactive management interventions.

“After having walked the length of Offa’s Dyke and drawing inspiration from its sights for my exhibition ‘Walking with Offa’, I became aware that the 1200+ year-old monument embodied the very essence of border culture. At various points the vulnerability became all-too-apparent and in conjunction with the Offa’s Dyke Association, a campaign and fund will now help to adopt a case-by-case approach to rescue sections from increasing cases of benign neglect.”

“I applaud the commitment of the Offa’s Dyke Association to maintaining and supporting this extraordinary and much loved national monument, particularly through the Offa’s Dyke Rescue Fund. The importance of this monument cannot be overstated, not least in its exceptional length of 177 miles and its status as a protected nature reserve. It is wonderful to celebrate the 50th  anniversary of the Offa’s Dyke path and the huge pleasure it gives to many thousands of walkers every year – so I’m full-square behind these efforts to secure it for the next generation.”

The Rescue Fund: https://www.crowdfunder.co.uk/offas-dyke-rescue-fund has been established to safeguard the dyke for posterity. Land purchases and maintenance under supervision of CADW will be arranged for sections under threat of neglect or deliberate damage.