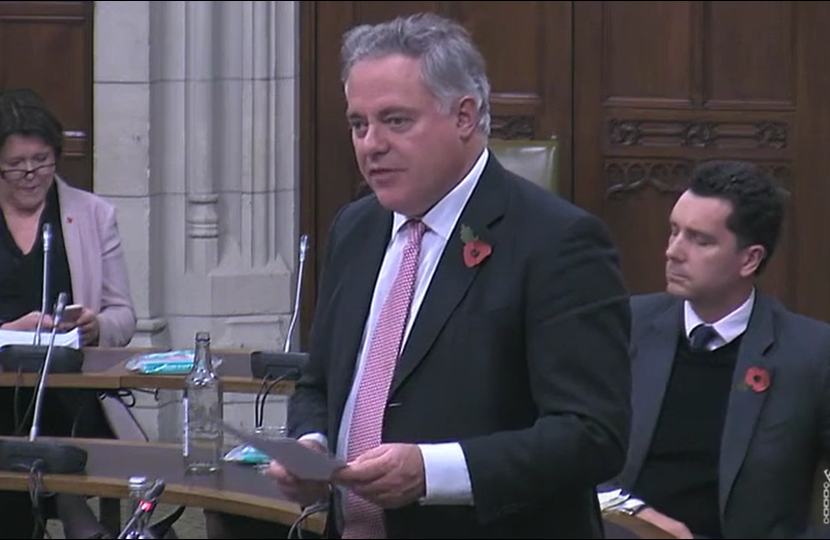 Member of Parliament for Clwyd South, Simon Baynes MP, has spoken out in support of the wedding venue industry in Clwyd South during a Westminster Hall debate in Parliament on Monday 9th November.

Mr Baynes addressed fellow MPs during the Live Events and Weddings: Covid-19 Support debate, stressing the importance of the issue to his Clwyd South constituents and the local economy. Mr Baynes spoke about the series of roundtable virtual meetings that he has organised over the last few months with representatives from the Clwyd South wedding venue industry, such as Phil Godsal of Iscoyd Park, Andrew Marshall of Tower Hill Barns, Tracey Owen of Tyn Dwr Hall and others from further afield in Wales. These meetings were also regularly attended by UK and Welsh Government Ministers.

Mr Baynes also highlighted the importance of the industry to rural economies such as those in parts of Clwyd South. And stressed that while this is a devolved issue in Wales, it is vitally important to recognise that the wedding venue industry across the UK is facing the same issue.

“The limit on numbers for wedding venues, whether that be 15 or 30, is arbitrary and should be related to the size of the venue. The limit is out of kilter with European venues, where the figure is often significantly higher—up to 100. The venues I talked to say that in the majority of cases, 50 guests is an economic number, and that it is difficult to break even with lower numbers.

“With all due respect to everyone in the health industry, weddings are not super spreaders of the virus. All the guests are known to the bride and groom and therefore easier to control in terms of track and trace by the venue. There is also a strong vested interest among the guests—to them, there are no random guests—to look after each other health-wise.

“Plenty of economic support has come forward but, as many have said this afternoon, it is not targeted in the way that it needs to be for wedding venues. One suggestion of a practical solution, given that a lot of venues are suffering from the withdrawal of clients’ deposits—that is now getting to be a very serious problem—would be the underwriting or financial furloughing of those deposits. That would bring stability and a breathing space so that the wedding venues can plan with greater confidence for the future.”

Business Minister, Paul Scully MP, in his closing remarks for the debate, said:

"It is pleasing to see the dedication of my hon. Friend the Member for Clwyd South (Simon Baynes) who, as a number of people have done, has brought the industry together, listened to the sector, reflected on its views and been working tirelessly for those sectors that are so hard pressed and unable to open fully, or in some cases at all."