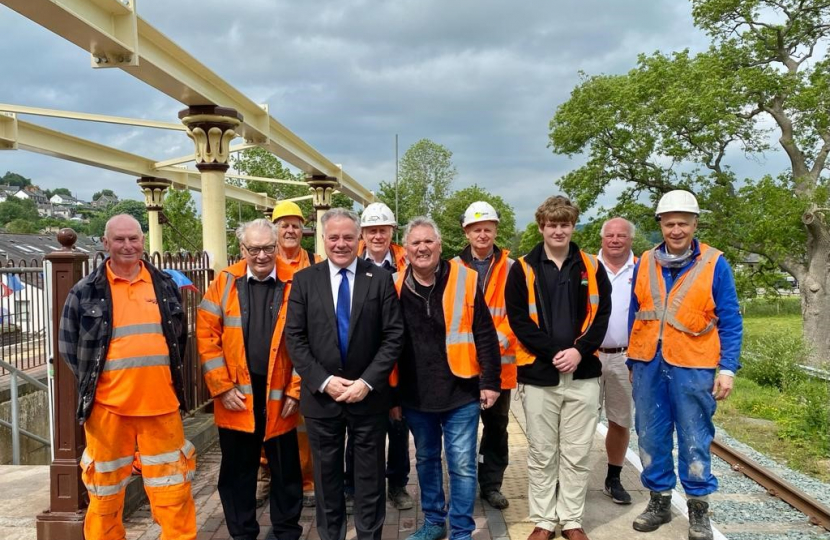 Member of Parliament for Clwyd South, Simon Baynes MP, has praised Corwen Station on the amazing recent developments following a visit during the Queen’s Jubilee Weekend.

During the Jubilee Weekend in early June, Mr Baynes visited the station and met with the Corwen Project Team and the Corwen Station team, who opened the station to the general public to show what has already been achieved and to indicate that a continuation of passenger services is not far off.

Mr Baynes was delighted to hear about developments that have been taking place including improvements to the station and track adjustments as well as the imminent construction of the station canopy. This is being funded as part of the Clwyd South £13.3m Levelling Up Fund grant which Simon Baynes MP secured from the UK Government.

“It was wonderful to visit Corwen Station and see at first-hand the amazing developments that are taking place. I would like to congratulate everybody involved in the construction work at Corwen Station which has involved a huge amount of volunteer time and expertise. I am very glad to have been able to contribute to the refurbishment of the station via my securing the £13.3m Clwyd South Levelling Up Fund grant from the UK Government which has financed the new canopy for the station. I can’t wait to see the station fully re-opened and steam trains travelling between Corwen and Llangollen next year.”