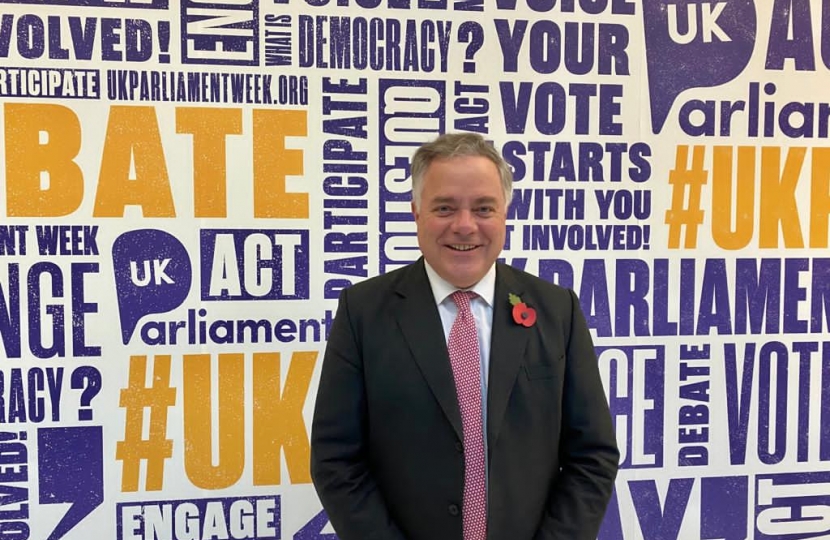 Member of Parliament for Clwyd South, Simon Baynes MP, has marked UK Parliament Week with a virtual ‘Meet your MP’ event alongside Sarah Atherton MP and hosted by AVOW – the Association of Voluntary Organisations in Wrexham.

UK Parliament Week is an annual festival taking place from 1-7 November, that engages people from across the UK with their UK Parliament, explores what it means to them and empowers them to get involved.

This year marks ten years of UK Parliament Week and is an opportunity for people to be part of a thriving democracy and look ahead to the next 10 years, thinking about what issues are important to them and how they can work with UK Parliament to bring about change. Community groups, local organisations and schools representing every constituency across the United Kingdom signed up to be part of the conversation.

Last year, over 1.2 million people took part in UK Parliament week in every nation and region of the UK, alongside countries all over the world.

“The evening gave the opportunity to hear from both MPs for Wrexham County Borough about how they have personally settled into the Parliamentary machinery in Westminster and in their constituencies and the challenges they have faced during the Covid Period. We had a wide range of questions, covering Free School Meals, Brexit, the Covid Response, Anti-Semitism and inequalities, Universal Credit and the North-South divide both within Wales and between England and Wales. We would like to thank Sarah and Simon for their insight and views.”

“It was a pleasure to join Clwyd South and Wrexham residents during Parliament Week. There were some excellent questions and I was pleased to talk more about my role as a local MP. I would also like to pay tribute to the fantastic work done by John Gallanders and his team at AVOW in supporting our local voluntary sector. They have played a central role in the Coronavirus crisis and more generally in contributing to individual and community wellbeing in our area.

"Parliament Week is such a great opportunity for people to learn about the role Parliament plays in the country and in the community – and I’d encourage anyone interested in finding out more about Parliament to contact my office on simon.baynes.mp@parliament.uk.”

Member of Parliament for Clwyd South, Simon Baynes MP, has welcomed the Comprehensive Spending Review for Wales, announced on Wednesday 25th November 2020 by Chancellor of the Exchequer, Rishi Sunak MP.