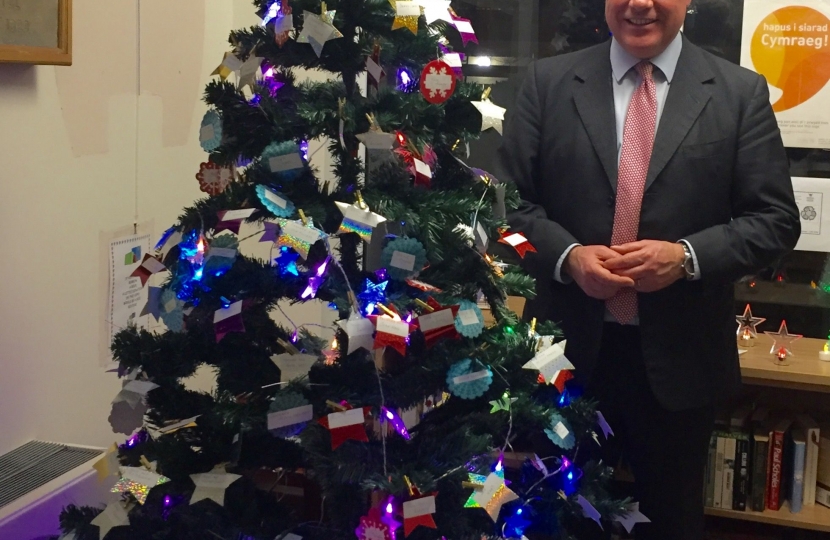 Chirk Hospital held their Tree of Light ceremony on Wednesday 9th December in which the names were read out of many people who have now passed away but are fondly remembered by their family and friends. It was organised by the Friends of Chirk Hospital and was very well attended. It is the fifth such annual Christmas ceremony and the names were read out by Julie Fawcett, the Secretary of the Friends. The Vicar of St Mary’s Church in Chirk, the Rev. Matt Wilkinson, also contributed to the ceremony and the Chair of the Friends, Sybil Jones, thanked everyone for attending and supporting the hospital.

“The Tree of Light ceremony at Chirk Hospital was very moving and provided a moment of quiet in which to remember those who have passed away but are still present in our hearts. It means a great deal to the community in Chirk as was evident from the large number of people who attended and then stayed for a cup of tea afterwards.

The Friends of Chirk Hospital, led tirelessly by Sybil Jones and Julie Fawcett, started this ceremony five years ago and it complements the work that they do throughout the year to raise money for improvements to the hospital. Their most recent project is the new car park without which many of us who attended the ceremony would not have been able to park near the hospital.

Sybil jones also pointed out that it was exactly 25 years ago that the rebuilt Chirk Hospital was opened by the Secretary of State for Wales which made the Tree of Light ceremony all the more special.”