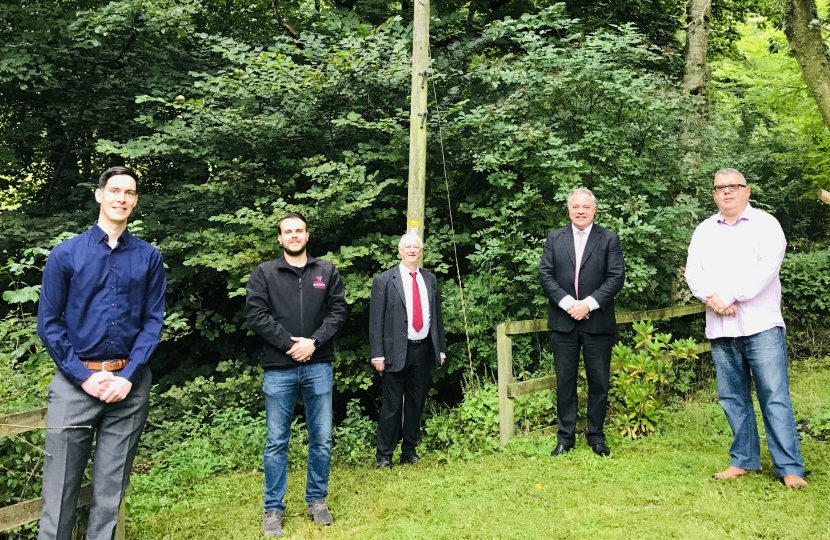 On 7 September, Clwyd South MP, Simon Baynes, made a socially distanced visit to Tregeiriog in the Ceiriog Valley to the home of Simon and Lee Adams where the first broadband connection in Wales under the Universal Service Obligation (USO) was being installed. Later, in the House of Commons on 16 September, Mr Baynes congratulated all involved in launching the USO and stressed its importance in supporting businesses and helping people back into work.

The USO was launched on 20 March this year by the UK government and guarantees residents a new legal right to request a ‘decent and affordable’ broadband connection from BT where one is not already available to them. It is intended as a ‘safety net’ for the 5% of all homes and businesses in Clwyd South (more than double the national average) that can’t already receive a decent broadband service, which Ofcom have defined as one that allows a 10 Mbps download and 1 Mbps upload.

Currently, all new broadband infrastructure delivered under the USO (including that in Tregeiriog) is  being funded directly by BT Group. For some homes in Clwyd South the solution may lie in accessing decent broadband over an EE 4G mobile signal or the same service from another provider. In addition, BT has recently announced a £12 billion investment in Openreach, which will allow them to deliver ‘full fibre’ to 20 million premises across the UK by the mid to late 2020s. Openreach are now connecting 30,000 new premises to full fibre every week across the UK.

At the launch, Mr Baynes was joined at the home of Simon and Lee Adams and their family by Ceiriog Valley County Cllr Trevor Bates and Wrexham Council Digital Business Officer, Mike Dugine, both of whom have been instrumental in securing the first USO in Wales for the Ceiriog Valley and Clwyd South. Also present was James Roberts, Openreach Project Manager for North Wales.

“I would particularly like to thank Mike Dugine, the Digital Business Officer at Wrexham Council, who has done so much to make this historic USO possible in the Ceiriog Valley. I am very pleased that residents in Tregeiriog will be receiving a much needed boost to their broadband access although there is a long way to go in connecting other residents in the Ceiriog Valley and elsewhere in the area.”

“The Universal Service Obligation offers hope for many hard to reach communities that until now haven’t been able to get a decent broadband connection. It’s great news that the first network upgrade we’ve supported under the USO in Wales has been delivered in the Ceiriog Valley. We know that there is more work to do for the area, but this is an excellent start.”

“There are a number of broadband ‘not-spots’ in Clwyd South where residents have sadly struggled for many years to get a reliable internet connection. Since becoming an MP, I’ve met so many people across Clwyd South who say this has a big effect on their day-to-day lives. People in Clwyd South need broadband to do work from home, order shopping and keep in touch with friends and family – particularly while the Covid pandemic continues.

“I was also very pleased to welcome the USO in comments on the floor of the House of Commons on Wednesday 16 September. The scheme is vital to supporting Clwyd South businesses and helping people back into work. And I’m especially proud that we are the first in Wales to take full advantage of this scheme.”