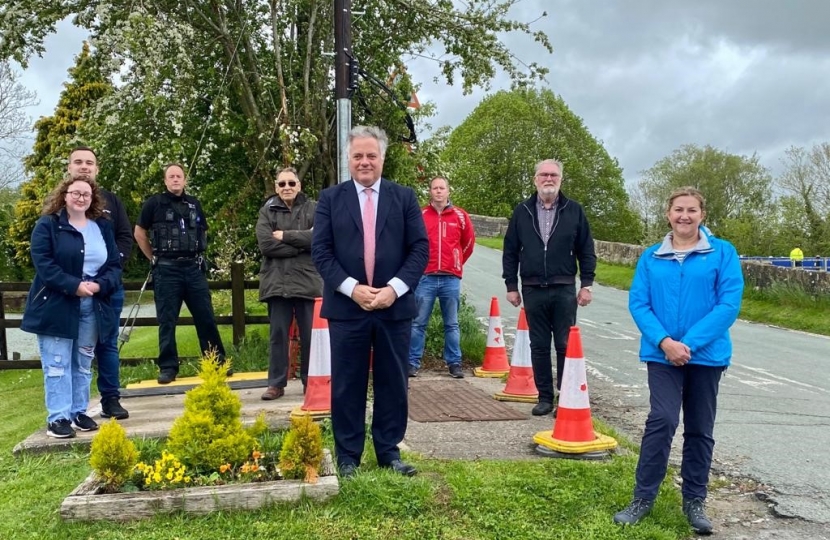 Member of Parliament for Clwyd South, Simon Baynes MP, has welcomed the news that Wrexham County Borough Council is to proceed with a new 30mph speed restriction – subject to statutory processes including consultation stages – for the village of Bettisfield (the speed limit is currently 60mph) following a recent road traffic accident.

This follows a socially distanced meeting in Bettisfield on 21st May organised by Simon Baynes MP with residents, the local County Councillor and PCSO, and representatives of Maelor South Community Council, where road safety concerns in Bettisfield were discussed.

On Monday 12th April, Bettisfield resident Yvonne Lee-Jones and her children narrowly escaped being run over by an out of control speeding vehicle on the canal bridge in the village. Since then, members of the local community had been looking into ways to lower the speed limit and erect more signage to alert drivers.

During the visit, Mr Baynes was shown the scene of the accident and praised the community for their efforts in highlighting the need for a 30mph speed restriction. Mr Baynes met with Yvonne Lee-Jones, County Councillor John McCusker, PCSO Dean Sawyer, Community Councillors John Blanchard and Simon Hill, and local residents Eddie Chadwick and Rosie Wilde. Since then, they have had a meeting with Wrexham County Borough Council which has led to a decision to introduce a 30mph speed limit in Bettisfield  - subject to statutory processes including consultation stages.

“Following a recent near miss where my family and I were extremely lucky to all avoid being run over by an out of control speeding vehicle in Bettisfield, we feel it is time a speed limit is implemented without delay to bring us in line with other villages in the area and beyond. Road safety is about reducing risk, not waiting for more accidents to happen before measures are implemented. A speed limit would make the village roads a safer place for pedestrians, cyclists, riders and drivers alike. And I am pleased that Wrexham Council is now taking concrete measures to implement a 30mph speed limit. This cannot happen soon enough – let's not have to wait for a tragedy to make this happen.”

“I was very glad to be able to meet with members of the community in Bettisfield and to pay close attention to their concerns about speeding through the village, particularly given the recent accident. I am very pleased that Wrexham County Borough Council, following my visit, have now listened to the views and concerns of residents and their elected representatives and I warmly welcome the plans for a 30mph restriction in order to make the roads safer for the community.”